If you build it they will come…well not quite accurate to the dialog in the movie Field of Dreams, “if you build it he will come” but there are parallels.

In 1991 two men had the idea/dream to build a place in Grand Junction, TN to house a National Bird Dog museum, Field Trial Hall of Fame and a Wildlife Heritage Center with tangible reminders of more than 100 years of sporting dog tradition. In addition to showcasing the early history of the National Field Trial Championships that continue to be held each year at the nearby Ames Plantation the plan was to also showcase the field trial accomplishments of the various sporting breeds and the men that owned, trained and handled them to their championships.

In front of the building stands a life size bronze of John Rex Gates(renown for his field trial accomplishments) with a Pointer and Setter behind a covey of quail exploding upward in flight. As donated, other life size bronzes are along the entrance walkway with Robert Wehle’s recognizable bronze sculpture of Elhew’s Snakefoot at the beginning of the Walk of Champions. 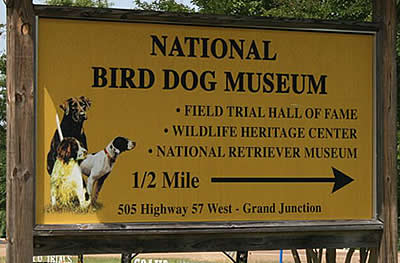 What originally began as two buildings cobbled together is now over thirty thousand square feet with multiple wings, a library and wild life heritage center to help with education into the future. Growth progressed as items were donated. Most recent, two refinished A. Backus wooden shipping crates circa 1900 discovered stored in a hay barn in New Hampshire. Long distance transportation at this time was almost exclusively by rail. A feature of these crates, food and water could be provided without removing the dog during transport.

In 2007 Don Kidd and Pete Kainz travelled to Grand Junction to discuss the possibility of improving the small corner area dedicated to the Shorthair and the potential for a field trial hall of fame specifically for Shorthairs and early pioneers of the breed.

In 2009 the Bird Dog Foundation, a 501c 3 organization announced expansion plans to include the Continental Breeds. Fifty-one hundred square feet fully integrated with the existing building would be added. Each breed would have its own dedicated floor space for displays and its own Field Trial Hall of Fame. Space would be determined proportionally by the amount of money each breed group raised. 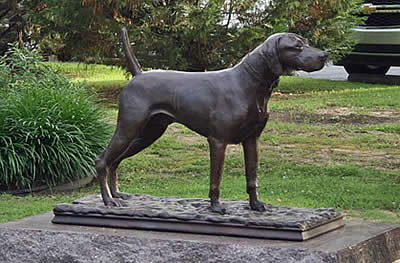 The goal was $500,000 to include endowment money and construction was to begin the summer of 2010. By August 2009 individual owners of the Shorthair, Brittany and Springer in addition to the National and Local clubs had donated over a hundred thousand dollars toward the new Continental Breed wing.

In 2009 the GSPCA, Inc.(Parent Club) began the process to commission a life size Shorthair bronze. Spearheaded by Director Gene Mosley it was unveiled on Saturday, 13 June 2015. In the GSP Wing a smaller replica titled “Sportsmanship is the Point” stands on a granite pedestal inscribed with the donor names. Future work and additions to the GSP wing are to include a historical timeline for the breed in addition to its field trial accomplishments.

Grand Junction, TN is located approximately 50 miles east of Memphis on Hwy 57. If in the area it is well worth a trip to see the Bird Dog Museum, Wild Life Heritage Center and Field Trial Halls of Fame. 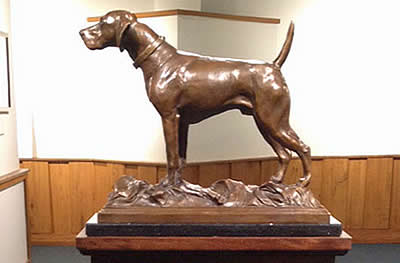 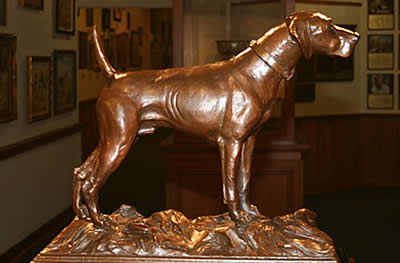 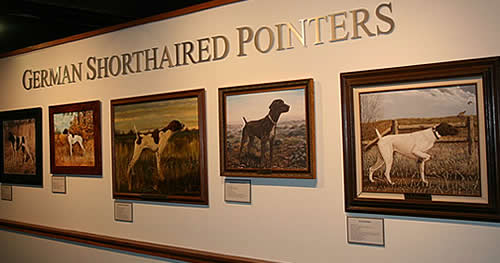