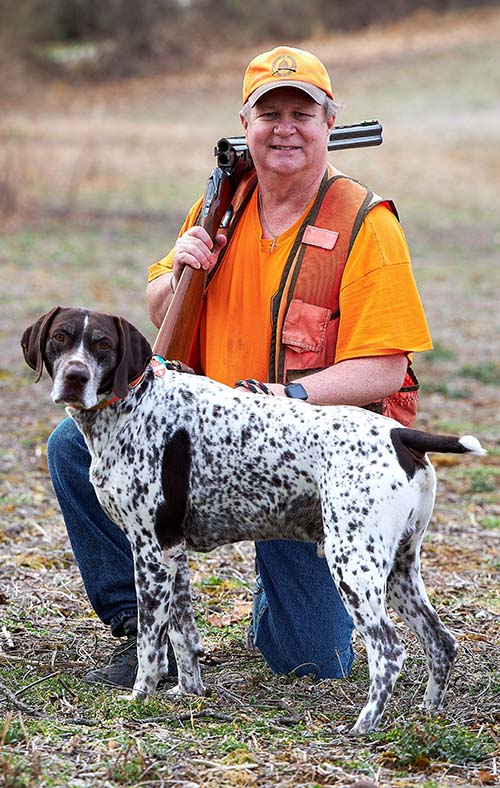 Cheryl (my wife) and I have owned 13 GSP’s since acquiring our first back in 1985. Currently we are fortunate enough to have 3 that share our house in Allentown, Pennsylvania. Several years after getting our initial Shorthair, we went to our first AKC Pointing Breed Hunt Test and from there we progressed to Field Trials and Shows. We have trained and handled our dogs in field trials, hunting tests and shows with a modest amount of success to show for our efforts.  Over the years, our dogs have earned 10 Junior Hunter titles, 6 Senior Hunter titles, 4 Master Hunter titles, 6 Championships, 2 Field Championship and 1 Amateur Field Championship. And most recently one of our dogs, Josie, became our first dual champion.  In addition to competing, I have judged numerous hunting tests and field trials including the 1998 German Wirehaired Pointer National Championship.

I have belonged to several local GSP clubs in my area, and I have filled positions ranging from Director to Field Trial or Hunting Test Chair to Membership Chair. On the national level, I was first elected to the Board of the GSPCA in 1996 as a Director for the then Eastern Section. In 1997 I was elected as Treasurer of GSPCA and (other than a two-year hiatus from 2005 to 2007) I have served in that capacity ever since.  As your Treasurer, I have sought to make sure that the club’s finances were handled in a prudent and professional fashion and that the Board and membership have the relevant information needed to make informed decisions about the direction of the club.

Looking to the future, my 2 primary concerns are:

My goal in seeking another term as your Treasurer would be to continue the efforts to ensure that the GSPCA remains in a strong financial position to deal with these or any other problems that we could confront over the next 5 to 10 years. I would welcome the opportunity to serve the membership for another term and would appreciate your support.